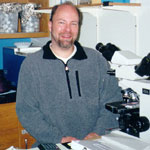 The overall goal of our research program is to understand genetic and extracellular mechanisms that regulate cell and tissue growth, whether that growth is a reparative response to tissue damage or an abnormal condition leading to cancer. Growth and its disorders are critically important medical subjects with enormous public health significance. To study growth regulation, we create and use genetically modified mice, and are focusing our studies on three organ systems: liver, mammary gland, and pancreas. For each organ system, we are asking specific questions that underlie important medical concerns.

In liver, we wish to understand how hepatocyte growth is regulated in response to parenchymal injury or altered expression of growth regulatory genes, and to determine whether transplanted hepatocytes can provide therapy following liver damage. Accomplishments include (i) documenting the kinetics of transplanted hepatocyte repopulation of diseased liver, and identifying the precursor cell populations capable of proliferating in this context; (ii) demonstrating that viable hepatocytes frozen for 32 months are as efficient at proliferation as fresh hepatocytes; (iii) discovering that therapeutically functional repopulation of diseased liver requires more than donor cell proliferation, and that post-transplant parenchymal reorganization may be the critical factor mediating functionality; (iv) providing evidence that non-hepatocytic stem cells are not the only endogenous cell type capable of repopulating severely damaged parenchyma; and (v) showing that chimeric livers composed of genetically distinct somatic cell populations can be used to assess the extent of cell autonomy governing hepatic responses to injury.

In mammary gland, we wish to determine whether preneoplastic epithelial lesions represent the progeny of a single cell or can be polyclonal, which would raise the possibility of cell-cell interactions during progression to neoplasia. We also are working to discover how cellular genetic changes and the female hormonal milieu interact during progression of mammary cancer. Accomplishments include (i) determining that progression of preneoplastic mammary gland lesions is highly influenced by mouse strain background; (ii) identifying a remarkable degree of polyclonality in preneoplastic mammary gland lesions; (iii) demonstrating that a membrane-anchored (cleavage resistant) growth factor can induce mammary cancer in vivo; and (iv) creating a mouse mammary cancer transgenic model using a potentially hormone-independent gene regulatory element.

In pancreas, we have sought to compare the effects of oncogene targeting to different exocrine pancreatic epithelial cell populations, and to assess how pancreatic lesions caused by expression of mutant Kras, the most commonly identified genetic alteration in human pancreatic cancer, vary according to host age. Accomplishments include (i) testing the currently feasible strategies to target transgene expression to pancreatic ductal cells and, in the process, serendipitously developing a model of invasive urinary bladder carcinoma; (ii) establishing a model of mutant Kras-induced pancreatic adenocarcinoma that combines the most commonly identified genetic alteration in human pancreatic cancer with the most commonly diagnosed histotype, something long-sought in this field; and (iii) developing an inducible transgene system to allow us to manipulate the timing of expression of mutant Kras and mutant Hras in pancreas.

In each of these areas, our accomplishments represent key objectives outlined in the grants that supported this work. Although each line of investigation is specific to one organ system, these studies are unified by their attention to how both the pattern of gene expression and the host environment can affect a pathological process. Stated another way, we assess the effects of specific genetic or tissue microenvironmental changes at the organismal level. After all, the living organism is the context in which genetic and cellular alterations become “disease.” Our future research plans continue to emphasize this approach.